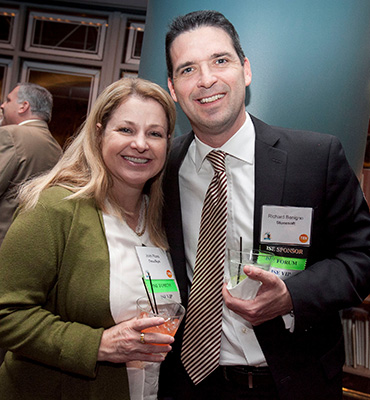 In 2010, Stonesoft was one of the number one network security solution providers in Europe, but was relatively unknown in the US marketplace. With fierce competition in the security space, the barrier to entry was very high. If we didn’t establish a presence within the next two years, it’s likely that we would have withdrawn from the US market.

As SVP of Sales, I was responsible for running the North American business and driving brand awareness. Working with a small team and limited resources, it seemed to be an impossible task. I needed a creative way to connect with senior level information security executives. Fortunately, I was introduced to Marci McCarthy within a month of coming on board. I attended an ISE® Private Dinner and was impressed with the relationships that Marci had built within the security community.

I knew that we had a great opportunity to partner with T.E.N. to launch Stonesoft full-force within the US market. Because most of the budget was already committed, we did a test drive that included several ISE® Private Dinners and participating in some ISE® Programs. The results were so impressive that we brought T.E.N. on board as a strategic partner for executive level events and to manage our Executive Advisory Board.

Partnering with T.E.N. allowed us to plan events for the entire year. We invested in a number of ISE® Private Dinners, all of the ISE® Programs, including Canada, at the Kilobyte level and ISE® VIP Receptions at the 2011 and 2012 RSA conferences. Measuring ROI is difficult in marketing. However, the T.E.N. programs demonstrated a direct correlation between the investment and the results they delivered.

The security industry revolves around trust on many levels, especially when it comes to investing in security technology. To engage with CISOs, you need an environment conducive to relationship-building. T.E.N.’s programs provided that environment and gave us the opportunity to build those relationships.

Whether you are a start-up company or an established multi-billion dollar firm, the challenge to connect with and build trust-based relationships is the same. T.E.N.’s programs provide an unparalleled platform for connecting and collaborating with senor information security leaders.