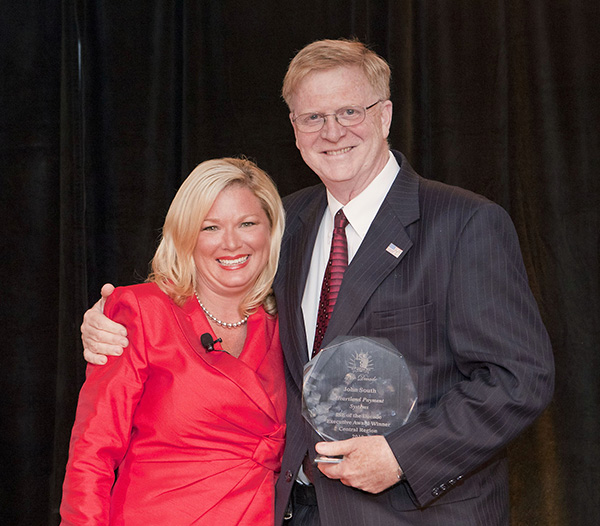 The fact that the ISE® Award focused on the science and art of information security and leading a good security practice made it an easy decision to submit a nomination. I liked that it focused on peer recognition of security and not security as an adjunct of IT. We also looked at the award program as a learning opportunity in that we were able to showcase our success, but also see what others had done that would be considered industry best practices.

Winning the 2011 ISE® Central Executive of the Year Award took me by surprise. What I appreciate most about the award is the peer recognition. It’s a great feeling knowing that my accomplishments were critically appraised and vetted and that, in the judges’ viewpoint, I merited the award. Because so few security professionals are recognized for their work, I believe that the greatest benefit to receiving an ISE® Award is the validation that your efforts are recognized and have value. Now, having experienced that moment on stage, the highlight of the award ceremony for me is seeing someone who doesn’t know that they have been selected as the best of the best realize that they are the winner. Seeing that look of pride and unscripted joy, I know that they are experiencing that same feeling of elation and validation.

Receiving the ISE® Award helped to increase the visibility of information security within my organization and reinforced the concept of security as a mission-critical function. Our marketing team not only promoted the award internally within the company, but also leveraged the award to promote our strong focus on information security as a competitive advantage. Participating in the ISE® program also opened a dialogue with several technology solution providers. We were able to become better acquainted with a various technologies and make determinations as to whether they would become part of our security infrastructure in the future.

The best part of the T.E.N. Experience is that it strengthens the community of information security professionals who, in many organizations, are not only fighting the bad guys but also fighting for budget, staff and other resources. The ability to network with peers who have faced similar challenges is extremely important. You may know someone’s name, but it doesn’t mean anything until you’ve had a chance to meet with them, share experiences, and build a relationship. To be part of a supportive community and know that if you have a question there are people who you can turn to for help is invaluable.

Receiving the ISE® Award was an immensely gratifying experience, but even better are all the benefits that I received as a result of just being involved. Unlike other conferences where it’s difficult to find someone, let alone build camaraderie, T.E.N events provide the opportunity to talk with and get to know really sharp people doing really sharp things. Submit your nomination. Participate in the roundtables and presentations. Renew acquaintances and meet new peers. Spread your network wider. Whether you win an award or not, you win simply by participating.