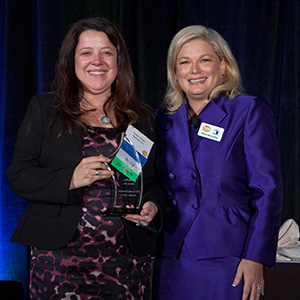 When one of my technology solution providers told me about the ISE® Canada Award program and asked me to consider participating, little did I know that I would receive the inaugural ISE® Canada Executive of the Year Award. T.E.N. and the ISE® Award Program were just beginning to gain visibility within Canada. Until my account manager suggested nominating me I didn’t even know about the ISE programs. The fact that they selected me as a person who they wished to nominate for the inaugural ISE® Canada award, meant a lot.

After some overnight consideration, I decided to move forward. I felt that our PCI Compliance program was worthy of recognition and the ISE® Award Program seemed like a good opportunity to showcase our accomplishments. The program was very polished. From the venue to the caliber of speakers to the intermingling of sponsors with attendees to the overall awards ceremony, the entire event was very impressive and went beyond my expectations. It was exciting for my team to participate and have our program highlighted in such a program.

When they announced my name as the winner of the 2013 ISE® Canada Executive of the Year Award, I was completely shocked and quite humbled. Given the caliber of the nominees, I didn’t  expect it. Nor did I expect the resulting benefits. Receiving the award has given me greater visibility both within my organization and the industry. Security, privacy, compliance and risk management are top priorities for us. The fact that we were able to participate and receive this award was validation not just for me, but for the entire security team and the organization as a whole.

As a result of the recognition I was invited to present at the Canadian Security Partners Forum in Ottawa. The event brought together some of the top security female professionals in Canada and the U.S., including the top-ranking security female in the military and the former CIO for the U.S. Defense Information Systems Agency. It was an honor to be included in that group.

One of the greatest benefits is the chance to network and meet information security executives that you might never get the chance to meet otherwise. The informal environment is conducive to networking and building relationships, and it’s refreshing to be able to talk in a relaxed setting. In addition to expanding my personal network, I have been able to learn about new security solutions, which I keep in the back of my mind for when the need arises.

I didn’t have much experience in participating in an award program, and I had to think about it overnight before I said “yes.” Looking back, I’m glad I did. In addition to becoming friends with the T.E.N. team and expanding my network, I have been elevated in the industry and have attracted some interesting relationships and partnerships. To be considered for nomination is a tremendous honor and the resulting recognition opens numerous doors of untold opportunity. When opportunity comes knocking on your door, say “yes.”