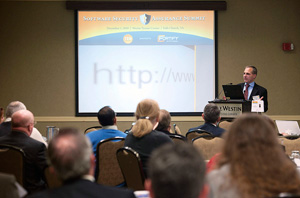 In 2009, Fortify Software (subsequently acquired by Hewlett Packard) faced the seemingly impossible task of selling software assurance technology and services to the federal government. While we were well-known in the financial services marketplace, the security executives within the federal government had limited visibility into the risk associated with the software running their missions. Attention was riveted on blocking network intrusions, despite the fact that analysts were estimating that over 80% of breaches were occurring in the software layer. Further complicating the situation was a lack of clear mandates relating to software security standards.

We needed a way to establish a presence within the federal marketplace. Recognizing that traditional sales methods would be ineffective in reaching the federal security leaders, lawmakers and other influencers, we sought the help of T.E.N. We looked to T.E.N. to serve as both a trusted advisor and organizer of a strategic program that would help us reach our intended audiences. We had also learned that T.E.N. had deep relationships within the security community and were confident that they would be able to bring the right people together.

Because the federal security leaders and lawmakers didn’t believe a problem existed, we knew our focus had to be on establishing credibility and calling attention to the fact that government systems were at risk. Partnering with T.E.N. allowed us to design a program aimed at educating attendees on the topics of federal security mandates, compliance issues and software security assurance. We invested in a series of nationwide Software Security Assurance Summits as well as a Luminary Leadership Luncheon and an ISE Private Reception with a book signing event in conjunction with the RSA Conference.

The one certain thing in the security industry is that investments in technology are based on relationships and trust. The T.E.N. programs provided an environment conducive to connecting with people we did not meet directly or in other forums and building the trusted relationships that would allow us to become a strategic partner in solving the problem.

Because we were able to connect with the right decision makers, our sales volume and speed accelerated dramatically in the ensuing years. And the executive relationships continue to deliver results. This past February the U.S. Department of Homeland Security penned a cybersecurity contract with HP worth up to $32.4 million, a major component of which is for software security assurance. This is said to be the largest acquisition of software security assurance tools worldwide and T.E.N. played a key role in helping us to form the relationships that eventually allowed the deal to happen.

Anyone can say they will run an event for you. The difference with T.E.N. is that they bring together the right speakers and the right security leaders, and then execute the program with flawless perfection to deliver both a positive experience for those attending and measurable results. While we get offers from other firms all the time, I know I can rely on T.E.N.