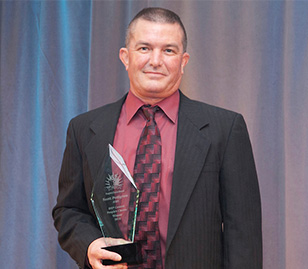 When I started here at HMS, one of the first big projects I took on was an identity management project. The vendor we were working with mentioned T.E.N. and ISE® Programs and their positive experiences. Once we saw substantial success with the project, we decide to submit a nomination for the ISE® Northeast Project of the Year Award.

The identity management project was later resubmitted for the national awards and we made the cut. Since we still had plenty of work left on the project and multiple milestones to hit, we decided to resubmit again the following year. I also decided that I’d like to submit for the executive category as well. Every year since, we’ve continued to submit new projects that we’re working on.

Working with T.E.N. and the ISE® programs has been a continuously positive experience. Our jobs are very difficult and a lot of times we don’t get a whole lot of credit or recognition. I think I approach security differently than most people, in that I take into consideration the risks as well as what’s doable and what’s not. Having these awards and garnering the recognition that comes as a result have been an extremely positive experience both externally and internally. These events have helped give me more exposure to our board of directors and the executives. Seeing the kinds of awards and recognition the team earned instilled a sense of pride and confidence. They know the people they have hired are making great strides and the work is being recognized nationally. When I show my awards to a CEO, his eyes light up. We have a trophy case that I’ve filled with ISE® Awards, so they’re going to have to build another one.

Additionally, the networking opportunities I’ve gained as a result of working with T.E.N. have been unbelievable. In addition to a number of new faces, I’ve also had the chance to meet up with familiar faces that I worked with previously and reconnect. The more you can network with others in what you do, the more it gives you a different perspective and helps to validate what you do in addition to giving you a different view of the way you do things. I think T.E.N. is a wonderful organization. The people there that I’ve worked with have always been awesome to me. The award ceremonies are always top notch and the T.E.N. Team does a great job putting on each event. They’ve all been valuable and interesting. I’ve even been able to lead a roundtable discussion. They are very professional in the presentation of the awards and the presenters at the events have always been excellent. I have also attended a number of ISE® Private dinners and all are well done. Each provides a good balance of business and networking opportunities and the vendor sponsors are top notch. You’re able to get a lot done during the event without losing too much time.

I would absolutely recommend ISE® Program to other executives. In fact, I already have. Although the nomination process does take some time and effort, it’s a true honor to be a nominee and the rewards are absolutely worth it. The relationships I’ve been able to build are invaluable to me. The recognition that comes from the events has also been invaluable and the networking opportunities are fantastic. Working with T.E.N. and participating in ISE® Programs has been the most positive thing I’ve done in my security career of 25 years.