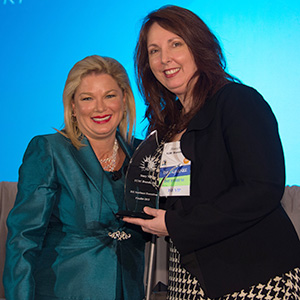 From the minute I arrived at the ISE® event, I felt such pride.  Looking back at past winners and at the people that were there in my presence was such a thrill. One of the most poignant points to me was that you are being judged by your peers. It was such a great honor just to be there and to be accepted into this group.

Accepting the ISE® Award also gave me the opportunity to highlight my team’s contribution to my company and that was what it was all about for me. As Director of Global IT Security at Yum! Brands, I was nominated for implementing strategies to decentralize our security architecture team and make it a global security architecture team with representatives all over the globe. To be nominated for this award by a member of my team was enlightening and empowering. What a privilege it was to lead them and I would only accept the nomination if I was able promote their work and hold them up as the responsible party.

I had just had major knee surgery and ISE® Southeast was my first major trip post-surgery – that’s how much it meant to me. With that being said, I was still recovering and using crutches.  I was sitting with some of my vendor partners in the very back of the room. When I heard my name called for the nomination, I remember being so excited but thinking how am I going to get to the front of the room! I have been to a few other T.E.N. and ISE® events since then and it has become a little joke with colleagues I have met.

One of the things that has really impressed me about T.E.N and ISE® is that it was created by a woman, Marci McCarthy, and that she has a predominantly female staff.  That has meant a lot to me because I want to help elevate the exposure of women, not only in IT but as entrepreneurs as well.

I do believe that the recognition from the ISE® Southeast Award elevated my visibility in the industry, which led to me being scouted and recruited for a new position. I also believe that being nominated for the ISE® Award has enabled me to attract top notch talent in recruiting. Ultimately, there is so much value in the networking opportunities. The conversations that we get to have as security leaders from different verticals are priceless. It is easy for us to work heads down day after day and not find time to network, get out of our comfort zones and meet new people. Those discussion’s help empower my decision making as well as help me understand who is doing what to solve what problems by using what tools. We are all still fighting the same battles and all of the different opinions are really beneficial.