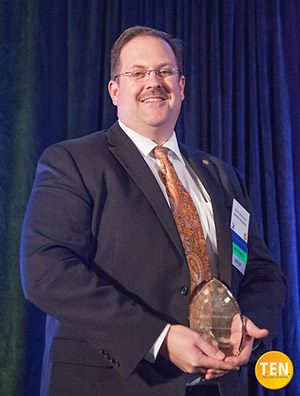 I learned about the ISE Awards Program through the email marketing they were doing at the time. I remember the messages and the reach outs to look at the programs and think about nominations. Our leadership team came to me and said “We’d like to submit you for these.”

I think we had a good story to tell. I always contend that what we were doing here, and not just me but also my team, is different than what other University operational CISOs and information security offices do. We’re heavily involved in the academic element of the university too. As far as student engagement, learning more about the field, and helping to train the next generation of network and security professionals. We go out and teach classes, we outreach to local schools periodically and when we have the opportunity we mentor the student cyber security team.

Coming from a higher education institution, I’m a big believer in security. It doesn’t matter if it’s higher education, big business, propriety industries, or just mom and pop operations, we’re all facing the same problem, the same battle, and the same adversaries that are trying to get our information. Some of us on a different scale than others mind you, but at the end of the day, the threats and the vulnerabilities are all the same. We all have a common threat that we’re dealing with.

Internally, being nominated for an award gives you some credibility, in that it’s a peer reviewed award. It’s not just something that an organization all by itself has done. You are peer reviewed in this and that’s one of the things that I like about it. It’s other CISOs and other people in the security industry from a broad range that are reviewing your body or work and what you’re doing and determining that you’re worthy of this recognition.

Outside of the organization, the ability to network and the credibility to network when you go to speak and different events, it comes with some level of credibility. It opens those door to be a speaker and a voice for others to listen to that they might not have listened to before.

When you look at the quality of folks that are previous nominees and winners, it‘s a very esteemed group of CISOs and people who are movers in the industry. People who are doing very quality work in the industry. From a personal standpoint, to even be on the same web page as some of these folks was an honor alone but I’ve actually been very fortunate enough to come out a winner in the year I was nominated. It was quite the honor and a welcome surprise.

I was in the regional event and I didn’t think I stood a chance. I though what we were doing was very good but the finalists that year came down to me and a CISO for a multinational conglomerate. Being a finalist was an honor by itself but when my name was called, I was really excited. I was sort of shell shocked in the moment to be honest with you. Then later that year, I sort of had that same feeling at the national level. It was one of those where you had all of the butterflies going in as you submitted the paperwork. Your like okay, I’m a finalist but it would be really cool to when, and there it was! It was a great opportunity to be there and receive all that recognition from your peers. It puts you on the map a little bit and it’s a singular award that is really backed by a great team of people. They do a really good job of making me look really good and making my team look good. At the end of the day they deserve just as much credit as I do.

The experience and the ability to bring those groups of people together across all verticals via ISE is phenomenal. We’re all dealing with the same problems and these events allow all of us to come together at the same table where we can have an open and honest conversation about it and collaborate together. At the end of the day one vertical may do things a little differently than the others and we do a number of little things differently, but many times they end up being similar. The ability to share collaborate and network with others is one of the best things to come out of the events. The recognition is great, don’t get me wrong, but the ability to have access to those other resources and share information with each other is a colossal boon.

The staff at T.E.N. from top to bottom is nothing but professional. They are willing to bend over backwards to work with you and help facilitate your needs. I think they work tirelessly. I wouldn’t expect anything less from this organization. They do a great job helping people in the tech and security industry network and enable that face to face communication. The things that we do and the events that they host have really opened up a lot of communication channels. The experience with T.E.N. has been nothing less than stellar and exemplary. Anyone wanting to get involved should be involved in that experience.

If anybody is on the fence about if they should apply, just know that from somebody who didn’t even think he was qualified to be on the same page as the others, put your name in the hat. Put your stuff out there. Let down your guard if you believe in what you’re doing and you believe in the programs that you’ve got. You don’t need somebody else to validate it, but at times it’s really good to get your work out there and if nothing else it opens the doors for others to come in to collaborate with you. Not only can it professionally help you as an individual, but it can help your team and organization be better. It will enable things and open doors. Don’t sit on the sidelines and think you’re not good enough or that what you’re doing is not worthy. If you believe in it, put your name in that hat and become part of the program.