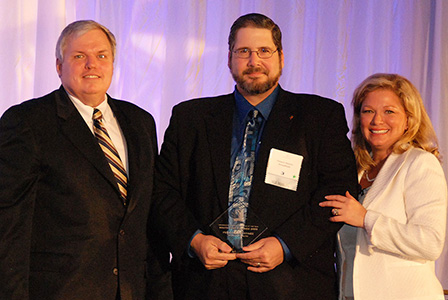 When I received an email inviting me to nominate for the ISE® Award, I thought that I received it by accident. While the award looked impressive, I didn’t see any healthcare providers among the previous winners. Thinking that it was a security award directed at the business community, I was all set to pass – until one of my solution providers offered to nominate me. We were collaborating on several innovative security programs, so I took a second look and moved forward.

I especially liked that the award recognized security expertise and accomplishments. Between HIPAA and ongoing cyber threats, it was clear that there was going to be a heightened focus on security and privacy. Because the ISE® Award specifically looked to distinguish firms that had good security programs, I thought it would be an excellent opportunity to showcase our security accomplishments and promote the organization as well.

I was completely surprised to be named the winner because I didn’t think that I could stand shoulder to shoulder with the previous award recipients. For me, even being nominated was an amazing feat. In fact, I didn’t even hear my name announced. To be evaluated by a group of my peers and selected as the winner personally meant a lot to me and is an accomplishment of which I am most proud.

The distinction of winning the ISE® Award gave me a new-found level of credibility within my organization. The recognition also allowed us to promote our security program as a competitive advantage and market differentiator. The healthcare industry at the time was seen as largely lacking in security. Having the ISE® Award recognition meant that we could claim a level of security competence that others in the industry may not have been able to claim.

The best part of the T.E.N. ISE® experience is that you get to talk to people from different industries that have problems similar to yours. Different industries handle problems differently. When you take those experiences in the aggregate, it gives you a new perspective that affects how you do things. I also met technology solution providers that ordinarily I would have never have a chance to meet. The comfortable conditions under which we met played a key role being able to develop trust-based relationships that eventually led to my doing business with several of the vendors. The recognition also opened doors to multiple speaking opportunities, which in turn helped to grow my professional network even more. Since the more people you know, the more people you are exposed to, it created a continuous momentum of security learning that all started as a result of my submitting my nomination and receiving the recognition.

For me the real value of the ISE® Award is the rigor that comes through the process of competing against peers who have equal or even superior competence. To receive an award that is conferred in the company of your peers by a group of your peers who have earned the privilege to serve as judges is indeed an honor. If you think the work you are doing is good, if you believe in your level of competence, then submit your nomination and let a jury of your peers render a similar opinion. You’ll be amazed at the results.