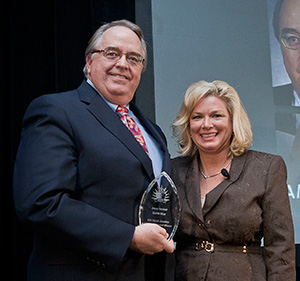 Having participated in one of the first ISE® Award programs, and seeing the positive impact that well-deserved recognition can have on a team, one could say that I’m a long-time believer in the ISE® Awards. Because I firmly believe in the power of recognition I’ve always encouraged my team to put their best work forward and participate in the ISE® Project of the Year Award Programs. Imagine my surprise when I learned that they had nominated me for the 2011 ISE® North America Executive of the Year Award.

Being named the winner was such a huge surprise that I can't remember exactly what I was thinking other than, “Wow!” Receiving an ISE® Award is a great honor because it’s recognition by your peers. Whereas some award programs are driven by advertising or decided by a judging panel that includes vendors, the ISE® Awards are judged by a panel of peers. That’s important because you know that your peers decided that you are worthy of the recognition. It makes you feel like you have really made a contribution.

Receiving the award gave us visibility and a level of respect within the organization that we hadn’t had before. In addition to receiving Board-level recognition, people across the company recognized that we were a world-class organization. From a team perspective, it validated their efforts and gave them a well-deserved boost. I believe that such recognition and validation of the team’s efforts is the real value of receiving an ISE® Award. It’s extremely powerful to be able to say that your efforts were judged by a heavyweight set of peers as being the best of the best. It demonstrates that what you do matters and that you are doing the right things and going down the right track.

One of the things that I value most about participating in the T.E.N. programs is the opportunity to network and be with a group of my peers. When you hear their stories and see their presentations, you come to realize that they are living in the foxhole with you and fighting the same battles. Having a network of peers and being able to share information is extremely important – and very valuable when you are seeking information to help combat the latest security threats.

The ISE® Award is more than just an award. It’s a journey that delivers recognition, validation, knowledge, and camaraderie. It’s the excitement you create within your team when they get the recognition they deserve. Why fight the cyber battles alone when a network of peers and allies await?  Take the step to submit your nomination and discover the power of the ISE® Awards.