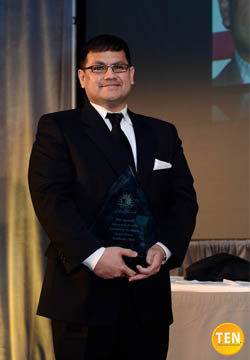 The beginning of my story with T.E.N. is a little different than most. I started out attending T.E.N. events and the ISE® Awards as a participant versus an ISE® Award Nominee. I really liked the sense of community that Marci McCarthy was building and there were a lot of well-respected experts I wanted to learn from. I used the first seven years of my involvement with T.E.N. to learn and network.

I was very fortunate to have found ISE Programs at the onset of my journey to become a CISO in 2002. It was one of the only peer-driven organizations that promoted networking and camaraderie in a nascent field of business and technology leadership not well understood nor respected by other C-level executives. From the beginning, I knew that I was surrounded by the best and every interaction was a blessing. Being able to learn from the best and find mentors and friends in the same community was and continues to be a godsend and special.

During those early years, I learned many valuable skills and gained wisdom from other CISOs that made me into the CISO that I am today. When you attend an ISE® Award Program, you are surrounded by the best in the industry. I remember back to attending these programs during the first decade of my career and being in awe of the who’s who of companies and leaders. Not only did I have the opportunity to learn and network with some of the most influential people in the industry, but I also acquired the soft skills that are necessary for a leader. Working with other CISO’s, watching their management styles and seeing how they interacted with their teams, gave me a good sense of what kind of leader I wanted to be.

After being involved with the organization, I was asked to help judge the ISE® Awards. To me, being a judge has been the best part of my experience with T.E.N. and ISE® Programs. It is a lot of work, but it is worth it. Being a judge provides a behind the scenes look at what your peers are doing successfully. The information you gain from their nomination forms and direct engagement during the judging process makes you a better CISO, and there is no other way to acquire this level of knowledge and insight. The opportunity to judge the ISE® Awards has been invaluable to me and allows me to benchmark myself and my programs against the best.

I have been able to take the collective knowledge and learnings from this peer group and directly apply it to each and every company that I've served. Participating in T.E.N. and ISE® Programs the group keeps myself and other leaders sharp and progressively excelling. Each award pushes us to excel and add-on to what's been learned and shared.

When I submitted my nomination in 2009, I did not think I was going to win. I was truly surprised! It took me a few moments to get out of my seat when my name was called. Honestly, I thought the two other finalist were better than me. I didn’t think I had a chance. It was a great honor to be recognized among such talented people, and I was now one of them. Winning the ISE® Award was, hands down, one of the highlights of my career. Being selected by a judging panel of peers is the unique factor that sets the ISE® Awards apart and makes this the most valuable award program in the industry. I know that the winner is selected based on their merits and our peers are validating our hard work. There is no other information security leadership award like it.

I have also had the privilege of participating in and hosting ISE® Private Dinners. The intimate setting allows the executives to come together to have honest dialogue about their success and challenges in various areas of security. The topics are all very timely and you have the ability to ask pointed questions about what works and what doesn’t, and then return to your team with that insight and knowledge.

People in our industry keep raising the bar. Even though there are finalists and a winner, I do not look at the ISE® Awards as competition. As a CISO, it is part of your responsibility to share the information to ensure the safety of our recosystem. That’s why it is so important that if you are an executive or have an innovative project that you submit a nomination and continue the sharing process. In your nomination, let your program speak for itself and do not hold back. Explain why you think it is innovative and successful; be sure it captures the true essence of the executive or project being submitted.

During my involvement with T.E.N., I have grown from a new leader to who I am today. I spent a lot of the early years absorbing every ounce of knowledge that I could and continue to collaborate with the fresh, up and comers because they have a lot of great new ideas. I value being able to pay it back, so to speak, by helping mentor them along the way. I am really thankful to be part of the ISE® Awards Program. It has enabled me to be able to learn, grow and mature as an InfoSec leader.